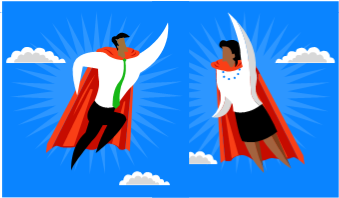 One of my favorite parts of my job is that I get to play. Being a rabbi in this community, I get invited to go talk to a lot of different groups of people. One of my favorite invites that I get is to go celebrate Shabbat at the JCC preschool in Scotch Plains. Spending a Friday morning, celebrating Shabbat with these hundred kids, seeing them sing Shabbat songs and bless the candles…it fills my heart with joy and makes me hopeful for our future.

I want to tell you a story of one such Shabbat. Now normally, I go and do my thing and have fun. But one Thursday evening I got an email reminding me that I was coming over the next morning to spend Shabbat with the preschoolers. In the email, it said that the theme of Shabbat was Gemilut Chasadim, acts of loving kindness.

So here was my challenge, to talk to preschoolers about being nice.  Okay… Talking to toddlers about being acts of loving kindness is like…well actually, I don’t even know to what it compares. It seemed to me that it would be like talking about nuclear physics to a group of ducks. I love children, but at times, asking kids to share and treat each other nicely is a difficult if not Sisyphean task.

As I woke up the next morning and went to the JCC, I was at a loss for how to talk about gemilut chasadim with any more depth than, it’s nice to share. I sat down in the back of the room and waited to be introduced. As I sat there I looked around at the kids. I saw them having fun, playing around (they probably should’ve been listening, but that’s okay). And then I noticed a boy wearing a batman t-shirt. Then I saw another one wearing a spider-man t-shirt and yet another couple of kids wearing superman t-shirt.

And you know something? They got it! For the next few minutes we practiced being superheroes and I heard them giving compliments to each other and even to their teachers. It was an amazing sight.

I’ve always loved superheroes. Since I was a kid I had comic books and viewfinders filled with stories of ordinary people being thrust into the spotlight and given a chance to be heroes. I read of people triumphing over their limitations for the betterment of their city or the world.

I want to tell you about a superhero; an eight year old superhero who was just like any other boy. His name is Sam Sommer and he is in fact a superman. The son of two Reform rabbis in Chicago Illinois, this boy became a hero to so many of us. In June 2012, Sam was diagnosed with acute myelogenous leukemia, AML. Many of us who followed Sam did not know him personally. We knew his parents; or we felt we did. You see, his mother and father kept a website and blog that detailed everything that Sammy was going through, what the entire family was going through. They wrote eloquently and heart-breakingly about their son’s struggle for survival.

Last December Sammy lost his battle with Cancer. He died on December 14th surrounded by his family. Thousands of people from across the United States and all around the world found ourselves crying for a boy we’d never met. We found ourselves unable to sleep because this superhero was gone.

Over the course of his short life, Sammy affected so many people. People all over found themselves drawn to this family. People from all walks of life hugged their children a little closer because they were reading of a family that was struggling. But what made Sam a superhero was not only the fact that he battled so valiantly, it was not the fact that he was an extraordinary boy. In fact, he was in every way an ordinary boy. But every ordinary boy and every ordinary girl is extraordinary. Sammy’s battle made us appreciate the small things in life, whenever Sammy’s mother wrote about the less than perfect aspects of her son, we could smile and relate. And we cried all the more so.

Sam died in December of last year, and this past April, at the most recent Central Conference of American Rabbis (CCAR) Convention they held an event called “36 shave for the brave.” The plan was for 36 rabbis to shave their heads and to raise money for pediatric cancer research. In the end, over 70 rabbis shaved their heads. And this once modest fundraiser raised over 654,000 dollars for pediatric cancer research.

Sam Sommer was a superhero. In his short time on this earth, his amazing spirit has inspired people to become better parents, and to appreciate life more. His struggle has led us to pledge that we will continue his legacy and continue the fight against cancer in his honor and memory.

We don’t need to be invincible or live forever to be a superhero. We don’t need to live to the rabbinically proscribed 120 years to be a superhero. Because we don’t measure our lives in the number of days we have. We measure our lives in the impact of those days. In eight short years Sam was able to inspire hundreds of thousands of people. His battle brought national attention to a serious issue. And that is his legacy, an ordinary 8 year old superhero.

These are the precepts that a person performs and enjoys their fruits in this world and these are they: honoring father and mother, bringing peace between people, and acts of loving kindness.

May this be a year for us to work towards making a difference. May we be blessed to see our values put into action, and may we inspire others to act as well. May we be fortunate enough to see that our legacy is a good one, dedicated to helping others and to increasing God’s presence in the world. However long we have on this earth, may our lives be blessed to have an impact in this world and to help those around us. May we inspire selflessness and charity, may we be disguise ourselves in a cloak of honor and may we soar to heights of chesed. May the memory of Sam Sommer, the memory of an ordinary superhero inspire us to achieve greatness. And may his memory, and the memory of our lives always be for a blessing, and let us say…Amen.